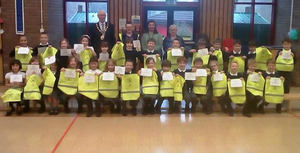 Be Bright Be Seen This Autumn

With the clocks going back later this month and daylight hours growing shorter North Wales Police would like to remind road users to take extra care and remain vigilant when out and about at night.

The arrival of autumn often means foggy weather, strong winds and stormy conditions. These, with the darker mornings and evenings, increase the risk of collisions taking place. Children, pedestrians and cyclists become even more vulnerable as they are less visible to motorists.

Inspector Martin Best from North Wales Police’ Roads Policing Unit said: “With the clocks going back at the end of the month and with it getting darker earlier on, it is more important than ever to make sure you can be seen when you’re out and about near roads. Motorists should drive considerately and reduce their speed to meet the traffic and weather conditions. Lights need to be in good working order and used when visibility is poor during the daytime. However be careful that headlights don’t dazzle other road users.

Roads And Routes For Walkers And Cyclists In £27m Boost

Road bottlenecks and safer routes for walkers and cyclists in Wales will be tackled by nearly £27m funding.

It includes nearly £2m for a Llangefni Link Road on Anglesey and major road schemes costing around £1.3m each in Carmarthen, Ceredigion, and Swansea.