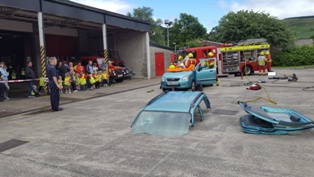 There were several activity stations including the use of the Fire Service's Cruise Car and Crash Car, Police vehicles, Beer Goggles, Alcohol Awareness, a presentation on the 'Fatal 5' and the importance of Child Car Seats. Fire officers also replicated a road traffic collision scene where they used their equipment to cut out a driver/passenger from the vehicle. This gave every person an insight into the consequences of the 'Fatal 5'. The 'Fatal 5' are inappropriate speed, drink/drug driving, careless driving, failure to wear seatbelt and using a mobile phone whilst driving.

Also, over 2 days of the event a seatbelt and mobile phone operation took place. Drivers and passengers who were not wearing seatbelts were stopped by the Police and given the option to watch a presentation delivered by the  fire service based on the consequences of their actions. 53 people were caught not wearing seatbelts and all opted to watch the presentation.  If they had refused they would have received a fine of £100 or if caught using a hand held mobile phone they would have received 3 points and a £100 fine.

This was the first time the event has taken place which was organised by John Jenkins Station Commander of Tonypandy and Treorchy Fire Station. It was a great success and educated people of all age groups.