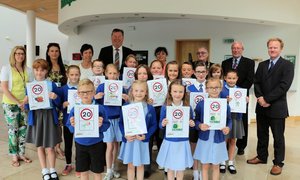 The event was attended by the Deputy Mayor Cllr Bevan, cabinet member Cllr Tom Williams and Head of Engineering Services Terry Shaw, who awarded the winners, Esther Knight- Webley from Bryn Primary, Hollie Seldon and Megan Sweet, from Derwen Deg Primary and Callum Martin from Ty Sign Primary School, as well as the runners-up, with their prizes.

Cllr Tom Williams, cabinet member for highways, transportation and engineering said, “What a pleasure it has been to view all the incredibly creative pieces produced by the children, it was a very difficult decision when choosing the winners. This competition is a great way to actively involve young people into the importance of road safety and road awareness. Well done to everyone who participated and congratulations to the winners. I look forward to seeing your road signs up in your local area.”