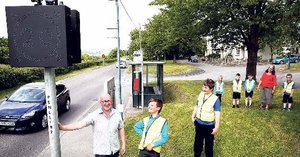 Cllr Rhodri Davies said: “Melindwr Community Council has been working on getting speed restrictions outside the school for years. The Welsh Government was looking at the situation and thankfully they listened, and we got it in the end.

“There is usually a 40mph limit, but in the mornings and afternoons on school days, it changes to 20mph and has flashing lights. So far, it is working very well.”