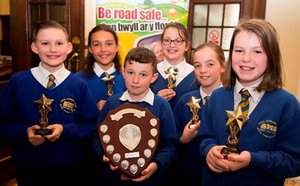 The quiz marks the end of another year for the Rhondda Cynon Taf Council Road Safety Team, which delivers road safety education to schools across the county borough to ensure pupils are safe pedestrians, cyclists and motorists of the future.

The team works with partners including South Wales Police, South Wales Fire and Rescue Service, the British Transport Police and the school community to raise awareness of issues such as illegal and dangerous parking outside schools, and recruits Junior Road Safety Officers in schools, who help to share key information and raise awareness among fellow pupils, teachers and parents.

The team also deliver Pass Plus Cymru - a driving course for young people, as well as safety and refresher courses for mature drivers, with the ultimate aim of ensuring the roads and pavements of Rhondda Cynon Taf - and the pedestrians, cyclists and drivers who use them – stay safe at all times.

Mayor Cllr Stephens said: “Well done and thank you to all of the pupils who took part in the 2016 Road Safety Quiz. It was a pleasure to meet them and I thank all of them for their effort and commitment at the event.