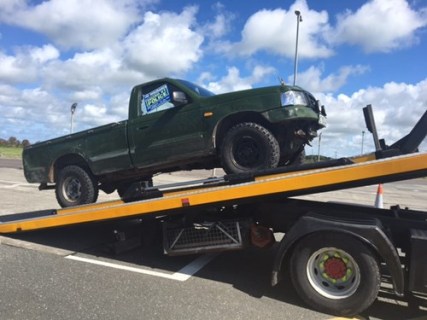 Part of his penalty also included a £300 fine for having no road user levy – a charge that HGV companies that are not registered in the UK and weigh 12,000kg or more must pay before entering the country.

During the day officers spoke to several drivers and six uninsured vehicles were seized. One uninsured driver already had 10 penalty points on his licence, this latest offence is likely to result in the loss of his licence.

Overloaded vehicles and drivers caught driving with the incorrect category of licence were also found during the day.

PC Nick Power of the Commercial Vehicle Unit said: “We stopped the HGV driver two weeks ago when he was fined £900 for very similar offences. We advised him at the time regarding the importance of complying with his drivers hours, but clearly he hasn’t taken any notice of what we said.

“Unfortunately tired drivers present a real danger to other road users, and in this case the man was driving a 44-ton HGV.

“One van was also seen towing a trailer that was overloaded with bricks and rubble. The rubble could clearly be seen over the top of the trailer which was dangerous. It doesn’t bear thinking about what would happen if anything came off the trailer and hit a windscreen. We’d like to remind drivers that if they are transporting anything that’s open to the elements they need to ensure it is secure before they start their journey – this could be a secure net or a sheet to stop items bouncing out of the vehicle.

He added: “These road safety checks are regularly carried out by the team – this is all part of our ongoing commitment to keeping the roads safe for all.”