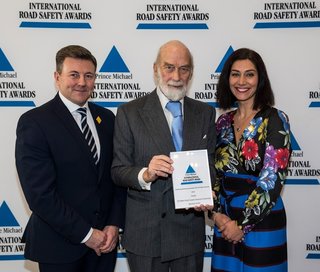 Since 1987 the Prince Michael International Road Safety Awards have given recognition to those who have improved road safety internationally.

On the 11th December, the Wales Road Casualty Reduction Partnership (GoSafe) attended the prestigious gala presentation at The Savoy, London, to be presented with an award by HRH Prince Michael of Kent for their innovative Operation SNAP initiative.

Operation SNAP was devised in response to requests from the public for police to deal with traffic offences detected by media such as dashcam, helmet cameras or personal video. It was the first project of this kind in the UK, utilising processes and resources established by GoSafe.

The aim of the project is to deter drivers from making poor or dangerous decisions behind the wheel, working on the basis that if drivers perceive they could be prosecuted for driving poorly they would not undertake that behaviour; reducing the likelihood of a collision.

Prior to Operation SNAP the average offence would take 15 hours to process; it now takes an average of 15 minutes. With approximately 170 offences reported per month in Wales, this represents a monthly saving of 2,465 officer hours.

Since the launch of the project, many other forces have engaged with Police in Wales, some from as far afield as Japan and Hong Kong, to gain an understanding of the benefits of introducing similar projects in their own force areas.

Teresa Ciano, Partnership Manager for GoSafe said, “It’s been an honour to work on such an exciting project, and it’s one we couldn’t have delivered without a true partnership collaboration. We’ve delivered a robust and secure method of receiving footage the public want to send us across Wales and are so happy to see it rolled out elsewhere; as part of the recently published Department for Transport Safety Action Plan, a bespoke new back office unit will be set up so that police can analyse video evidence submitted by the public. This builds on the success of Operation SNAP - it really is a multi-agency effort, and one everyone involved has worked hard to deliver. Together, we want to make all our roads safer.”

The future looks bright for Operation SNAP, with more members of the public using the system to report all manner of road offences. Welsh forces are now looking to utilise the system to receive footage of other offences; ensuring the technology available is used to its best potential in reducing crime and keeping our roads and communities safe.