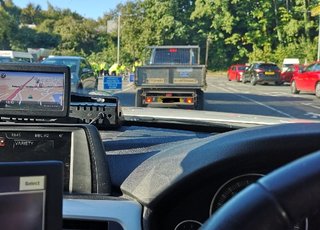 The Operation, which has been running at regular intervals across Gwent for almost 15 years is aided by Automatic Number Plate Recognition (ANPR) cameras, both in police cars and on the roads, to identify potential offences.

81 vehicles were stopped and checked in total. The results were as follows:

West Area Support Unit Inspector Wendy Keepin, who led the Operation, said, "These Operations are a real joint effort between a variety of different agencies, in an effort to make our roads as safe as possible.

"We wanted to tackle those road users who drive recklessly and endanger other road users by driving vehicles with dangerous defects or by not adhering to safety regulations. All of these results help to make our roads safer which is the key aim for us. I hope this sends out a clear message to anyone using our road network for criminal activity or in an unsafe way that this is not acceptable and when identified, they will be dealt with robustly.

"I would like to thank everyone that made this operation possible and a success, and look forward to working together again on Operation Utah in the future."

Councillor Fiona Cross, Executive Member with responsibility for Public Protection at Torfaen Council, said, “We will not tolerate drivers who put lives in danger. This activity is an excellent example of partners working together to make Torfaen’s roads safer for all users.”

Anyone with concerns about suspect vehicles or road users in Gwent can contact Gwent Police on 101, or 999 in an emergency.