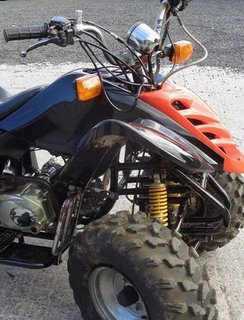 "This is why we are working with the South Wales Police on this matter and our operations will continue to try to remove as many of these vehicles as possible.

"These bikes can be used on private land with the permission of the landowner or at any registered track. What is not allowed is to drive them on council land, often being driven dangerously at speed which puts other park users and road users at risk."

PC Martin Baggett from South Wales Police said,"We know that off-road bikes are a concern for the community and Operation Red Mana is a policing operation dedicated to tackling the issue. Such use of off-road bikes is not only against road traffic regulations but is also extremely dangerous.

"Our concerns are that someone could be hurt by these bikes which are being ridden at high-speed and also the noise which is damaging quality of life for residents.

"We would also remind parents of their responsibilities in relation to their children using off-road bikes. The last thing anyone wants is for us to be called to the scene of a collision where someone has been hurt or worse."

The Road Traffic Act allows police to seize such uninsured vehicles and those being driven without a licence. Section 59 allows the police to give drivers a warning if they are reported to have used their vehicle in a manner which causes "alarm, distress or annoyance".

Offenders also risk losing their homes as anti-social and illegal behaviour could see them in breach of their tenancy agreement with the local authority or housing association.

Members of the public are encouraged to report any general information regarding the illegal use of off-road bikes in South Wales by e-mailing opredmana@south-wales.pnn.police.uk