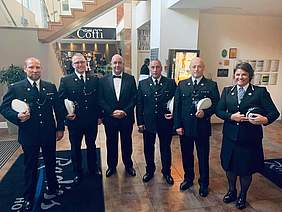 Chief Constable Pam Kelly said, “What an amazing achievement to be nominated amongst all of this talent we have here in Wales. It was a privilege to join our officers yesterday evening – I’m so proud of the work and professionalism that they have displayed in the series.

“The programmes have provided a unique insight into the role of Gwent Police’s forensic collision investigators, as they uncover the truth and evidence surrounding some of the most serious incidents on our roads. I’d like to take this opportunity to thank the team and everyone who has helped in the making of season one.

“A special thank you to Jenny Casterton from the BBC for bringing the work of our officers to the screen - capturing the realities and technical professionalism day in day out - we’re now looking forward to season two airing in early 2020.”