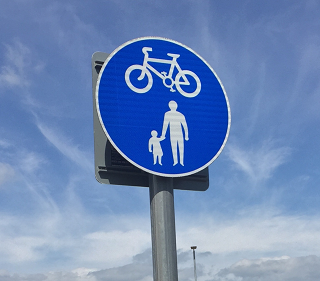 Works to extend the path on Llanidloes Road in Newtown to the college and theatre are due to begin in the New Year.

Funded by the Welsh Government, these improvements will complete the main Active Travel routes within the town, previously identified in consultations with residents, businesses and local communities.

These Active Travel routes in Newtown will provide a safe network of routes for all users, including vehicles, pedestrians and cyclists.

As part of the planned improvements, the path under Nantoer Bridge will be widened, significantly reducing the safely risk for pedestrians and cyclists (particularly young people walking to and from the college). This will be achieved by using one of the existing traffic lanes to create the extra wide pavement.

The carriageway will be reduced to one lane, with two-way traffic controlled by programmed traffic lights. To improve the road safety on the approach and under the bridge, the speed limit will be reduced from 40mph to 30mph.

Cllr Heulwen Hulme, Cabinet Member for Highways, said: "We are delighted to be able to extend the existing walking and cycle facilities on Llanidloes Road. The area under the Nantoer Bridge has been of significant concern for many years, where we have seen a number of accidents, and the existing narrow pavement has prevented lots of young people cycling or walking to college with confidence.

"The new bypass has given us the opportunity to develop schemes like this in Newtown, which will not only encourage Active Travel throughout the town, but will also reduce the number of large vehicles using Llanidloes Road as a through route.

"By completing this Welsh Government funded scheme, we are confident that the safety of the route under Nantoer Bridge will be significantly enhanced with very little impact on road users journey times."