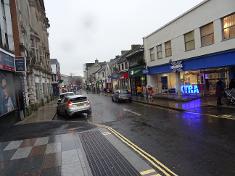 Mark Thomas, Cabinet Member for Environment and Infrastructure Management, said, "We are creating a city centre that will become increasingly attractive as a place to be - a location where people want to live, work, shop and spend quality free time.

"That is already in evidence on The Kingsway; now we're working on extending the city centre's main pedestrianised area by improving a short section of Park Street and the upper section of Union Street, from Park Street to The Kingsway. This plan was seen on plans at public consultation events for the Kingsway Infrastructure Project.”

Access to the existing pedestrianised area is controlled by automatic bollards at Whitewalls and Nelson Street. To maintain security of the main pedestrianised area, the council plans to install new fixed bollards to prevent this section of street being used a through road for vehicles.

After work to pedestrianise the upper section of Union Street is complete, business service access will be permitted from 4pm to 10.30am.

To allow the improvement works to take place, the western end of Park Street and upper section of Union Street will be temporarily closed to vehicles from January 6 for a number of weeks.

Queries relating to the project can be emailed to: TheKingsway@swansea.gov.uk