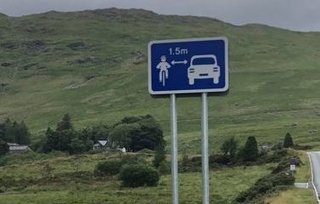 A new scheme to remind drivers of the minimum space needed to ensure safety when passing a cyclist has been launched by Gwynedd Council. The first of their kind in the UK, the road signs installed along popular routes in Snowdonia are urging motorists to give cyclists 1.5 metres.

As part of a trial, the Council has received Welsh Government support to install the signage at locations along roads popular with cyclists in the northern part of the county.

Councillor Gareth Griffith, Gwynedd Council Cabinet Member for the Environment, said, “More people have made the most of the quieter roads during lockdown, but with traffic slowly increasing, Gwynedd Council is eager to ensure that cyclists continue get the respect and space they deserve on our roads.

“This project has been planned for some time and has looked at similar signage which is already used in many countries in Europe. We hope the scheme will benefit occasional cyclists out with family and friends as well as more experienced cyclists who enjoy our stunning hills and mountain roads.

“Close passes are not only intimidating for cyclists, but also very dangerous. With more people using cycling as an alternative mode of travel and for recreational use, we must make sure that everyone out on their bike feels safe on the road.

“I am therefore pleased that Gwynedd will be the first to trial these new safe passing distance signs which will inform motorists of the need to give cyclists the space they need as well as reminding motorists of their likely presence on the road.

“The signs have been placed in specified locations in Snowdonia and if they prove popular we hope to be able to see them used in other parts of Gwynedd and beyond.”

The signage has been supported by GoSafe, the Wales Road Casualty Reduction Partnership. Teresa Ciano, GoSafe Partnership Manager said, “GoSafe has been involved with Operation Close Pass, alongside our colleagues and partners in the Fire & Rescue Service and local authorities for a number of years. We have been actively promoting the Close Pass message and continue to emphasise its importance.

“We all have the right to use our road networks and to do so safely and confidently. GoSafe fully supports the trial of the new safe passing distance signage on roads across Gwynedd and hopes that these signs will remind motorists to be aware of the distance they give cyclists when overtaking, which will contribute significantly to their safety as they use the roads.

“GoSafe aims to work with our partners in all local authorities across Wales to further develop this signage scheme, which will eventually see them become commonplace on popular cycling routes all over Wales. A close pass can have serious consequences and can impact heavily on the safety and confidence of cyclists. We encourage every motorist to observe the safe passing distance and to play their part in making our roads safer for everyone.”

The signs have been placed in the mountain passes and road network that surround the Snowdon Massif, namely:

Gwynedd Council is eager to hear from cyclists and other road users about their views on the signage, and ask for any comments to be sent to trafnifdiaeth@gwynedd.llyw.cymru – the feedback will be used to consider a possible wider roll-out of the scheme.