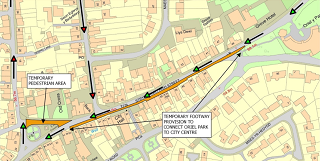 The temporary scheme has been devised by Pembrokeshire County Council, who say they will be monitoring it closely and will be used to record the impact on sensitive streets such as Nun Street.

“St Davids is one of Pembrokeshire’s busiest locations in the summer, with significant numbers of tourists,” said Cllr Phil Baker, Cabinet Member for Infrastructure.

“The one-way traffic system aims to ensure that visitors and residents feel safer and more confident on the key pedestrian route into the city.

“Other footways are not being widened, but their usage will be monitored and the whole scheme kept under review and adjusted if necessary.

“We are eager to continue to work with the City Council, local County Councillor and businesses as we reintroduce this initiative.”

Supported by a 20mph temporary speed limit, the scheme was introduced last year after consultation with the local community and is endorsed by the City Council and local member Cllr David Lloyd.

The scheme will continue to cover the busy tourist season and beyond as required. It is also proposed to be enhanced by a more aesthetically sensitive ‘bolt down’ kerb scheme at a later date.

Cllr Lloyd acknowledged the work of the officers of the Council’s highways department in developing the scheme, which he said has met with widespread approval from the local community.

“I’m happy that all concerns have been properly addressed and my thanks go to all involved for this excellent work,” he said.