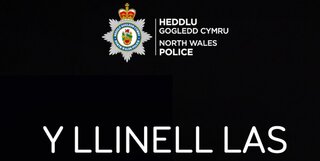 Another member of the Roads Policing Unit for 11 years is PC Alun Jones. He receives a call about a car on its side in the middle of the road - without a sign of anyone. The accident is serious with the driver probably doing up to 90 miles per hour and shattered glass everywhere. He said, “Most people who run away from accidents like this, it's not just because they don't have insurance or a licence. There’s usually more to it.”

For the first time ever, cameras will have complete and honest access to the work of North Wales Police as they work to keep communities safe in an area that ranges from secluded country lanes to the busy North Wales Expressway, the A55.

Filming for Y Llinell Las began over Christmas in 2019 and over the recent period of Covid-19, the team has followed all the guidelines, legislation and protocols the Welsh Government has set to ensure that the work continues in safe way.

The series also draws our attention to drink and drug driving, speed, violence against the police and much more.

Y Llinell Las can be seen on S4C on Tuesdays at 9pm - English subtitles are available.