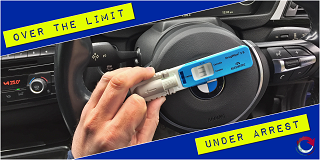 Led by Dyfed-Powys Police in Wales, the national campaign saw all four forces take part throughout December to clamp down on drink and drug driving.

Strategic Lead for Roads Policing in Wales, ACC Mark Travis of South Wales Police said, “Drink and drug driving has devastating consequences for families and communities. The majority of drivers are responsible, so we thank those drivers who respect the law and the safety of others. The results of this campaign sadly show that many are not, their behaviour places others at risk and this is unacceptable.

“As a service we are committed to reducing fatal collisions. We will use our resources to target those members of the community who place others at risk and it really is not worth the risk. Let’s make our roads and communities as safe as we possibly can.”

Dyfed-Powys Police Superintendent Clark Jones-John said: “181 drivers in Wales had a Christmas and New Year to remember for all the wrong reasons - after being arrested by our officers for drink and drug driving.

“It is disappointing that some people are still prepared to take the risk and get behind the wheel whilst under the influence.”

Although the figures showed a reduction in the percentage of failures for three of Wales’s forces, Dyfed-Powys Police saw an increase of almost 5%.

The dangers of drink and drug driving are plain to see. Those that do take the risks clearly don't think about the families of those people who have died at the hands of a driver who is affected by alcohol or drugs.

“Our officers are often the first ones on the scene of these types of collisions and some of the things they have witnessed are horrific. Nobody should ever have to witness that or have to suffer due to the irresponsible and unlawful actions of another.”

Supt Jones-John added: “Our officers work 24 hours a day, seven days a week and anyone who is considering driving whilst under the influence should know that we will be out and about waiting for them – please don’t think the rural nature of the region affords you protection because it doesn’t.

“We will continue to crack down on those who take this unnecessary risk and bring them before the courts.”