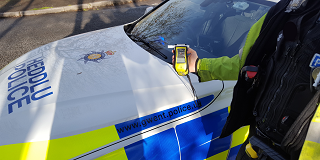 Gwent Police arrested 109 people on suspicion of driving while under the influence of alcohol or drugs as part of the force’s Christmas road safety campaign.

Officers from Gwent Police joined forces across Wales, and the wider UK, in conducting intelligence-led vehicle checks on roads within the force area between Tuesday 1 December and Thursday 31 December.

During the campaign period, more than half of the motorists arrested for drug-related driving offences were aged under 30, while a majority of older motorists – aged over 30 – were arrested for drink driving.

“While an overwhelming majority drive within the law, a small minority of motorists still think it is perfectly acceptable to put lives at risk by getting behind the wheel after drinking alcohol or taking drugs.

“We’ve seen more arrests for drug driving during our Christmas campaign this year than compared to drink driving, and a majority of those motorists who were arrested for drug driving offences were younger – aged below 30. Driving under the influence of drugs is equally as dangerous as drink driving; and it is just as detectable during the tests conducted by officers at our intelligence-led stops.

“Our message is simple; please don’t risk your life and the lives of other road users by driving while under the influence of alcohol or drugs. It is never acceptable.”

Of the 109 arrests, 38 motorists were arrested on suspicion of drink driving, while 71 arrests were recorded relating to drug driving offences. Officers from the force’s area support unit, supported by its rural crime team and special constabulary, stopped more than 2,700 vehicles in the 31 days of December.

“Christmas is over for another year but our aim to keep Gwent roads safe remains in effect and does so throughout the year.

“Road safety is of paramount importance to Gwent Police and we’ll not tolerate behaviour that puts lives at risk on our roads. We want to stress that any motorist caught driving their vehicle dangerously, erratically or recklessly will be prosecuted.”