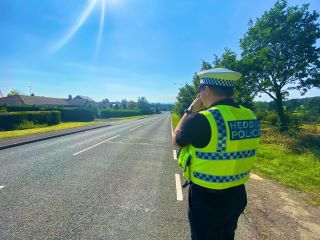 Speeding is a major contributing factor to collisions on the roads of Wales. This includes both ‘excessive speed’, where the speed limit is exceeded, as well as driving or riding within the speed limit when this is too fast for the conditions at the time; for example, in poor weather, poor visibility or in areas of high pedestrian activity.

During the Coronavirus pandemic, the Police saw less traffic but higher speeds.  Now restrictions are lifting, traffic volumes are up and as with holidaying in the UK more, the Police are seeing more people speeding on the roads in Wales.  They want to change this, but can only do that with your help.

Over the next few weeks you will see an increased enforcement presence on the road network of Wales, to keep all road users safe and reduce the number of people killed or seriously injured on our roads.

The majority of road users comply with the speed limit; but the minority of those who do not increases the risk to the safety of all road users and need to be educated on the risks to their own safety as well as to the safety of those around them. Throughout this campaign, GoSafe and their partners in the Police and Local Authorities will encourage and educate more people to reduce their speed to save lives.

Teresa Ciano, GoSafe Partnership Manager said, “GoSafe enforce at sites across Wales in order to encourage motorists to comply with the speed limits and in turn make our roads and communities safer for everyone. If we all play our part and stand up for slowing down we can make a difference, and we can save lives on the roads of Wales.”

Lee Waters MS, Deputy Minister for Climate Change said, “I am very pleased to support this campaign. Driving at high speeds costs lives and a greater police presence on our roads will mean motorists will be more likely to drive within the speed limits, protecting lives and avoiding a speeding fine.”