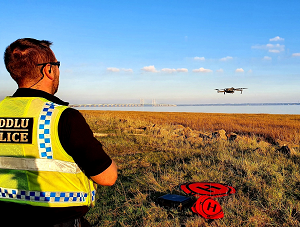 Riders have either received warnings, been reported for driving without insurance or a licence, or made to pay to recover seized vehicles. Between October 2020 and September 2021, Gwent Police seized 135 vehicles.

Vehicles have also been crushed when riders have been unable to provide proof of ownership, insurance or when the vehicle has not been fit for use on the road. In order to be ridden on a road or other public place, the vehicle needs to be insured, taxed and have a valid MOT certificate – something officers would like to stress to parents as the festive season approaches.

“We’re lucky to live and work in a beautiful part of the country here in Gwent.

“From the Blaenavon World Heritage Site, to Twmbarlwm and Trefil, illegal off-road biking can cause great damage to the environment and in our communities. It’s important people know of the consequences and that we will seize vehicles wherever possible. But the operation isn't just about taking these vehicles away from those who ride them irresponsibly.

“It’s also about discouraging people from doing it in the first place, making it less socially acceptable and encouraging communities to share intelligence when these vehicles are being used. By doing so, you are helping to protect land and wildlife, and make our roads safer.

“There are a small number of legal green lane routes in the area, and we’d encourage riders to find out more about which routes are available in your area.

“Finally, I’d like to thank our partners, whose continued support has enabled us to address the issue head-on over the last twelve months, and the public, whose reports of the dangerous use of off-road vehicles have helped bring about these positive results.”

“Illegal off-road vehicles cause considerable damage to our woodlands and forests, stopping people from enjoying their local countryside.

“It can have far-reaching consequences for the environment, damaging trees, streams, paths and special features of the landscape, as well as disturbing sensitive habitats for our wildlife, causing destruction that might take years to repair, if repair is possible at all.

“It also brings an unwanted cost to the public purse when we have to repair damaged fencing where people have forced entry – money that could be better spent elsewhere. Clamping down on illegal off-roaders is vitally important to make sure that our woodlands remain a safe space for everyone to enjoy.

“Working with Gwent Police and our partners, we were able to target specific hotspots across a number of our sites and take proactive action to help tackle this issue, as well as issue reminders to people to respect the area, behave responsibly and help look after our beautiful countryside.”