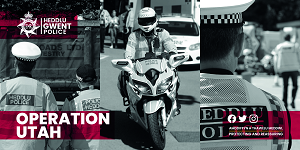 They teamed up with partners from the DVSA, DVLA and Caerphilly County Borough Council.

Gwent Police’s Roads Policing and Specialist Operations Unit escorted motorists to the check site in Newbridge before officers and the DVSA undertook checks on the condition of the vehicles (including tyre checks), and partners undertook full driving licence, insurance and tax checks.

Throughout the course of the day:

“We all have a role to play in ensuring the safety of road users and pedestrians. That role includes driving carefully, responsibly and ensuring vehicles are always well-maintained.

“Those who choose to break the law on our roads by driving vehicles that aren’t roadworthy not only put themselves at risk but others too.

“We’re committed to increasing the safety of all road users in Gwent and Operation Utah is one of the ways we tackle these motoring offences.

“I hope the results from this operation send a clear message that driving irresponsibly is unacceptable and you will be dealt with robustly.

“I’d like to thank our partners for working with us on this operation to make the roads in our communities as safe as possible.”

“DVSA’s priority is to protect you from unsafe drivers and vehicles.

“We are disappointed to find numerous examples of noncompliance and disregard for vehicle safety standards in Gwent. The law is in place to protect people.

“We are determined that our partnership work will educate drivers, and discourage them from endangering the public by not checking their vehicle is safe before beginning a journey.”