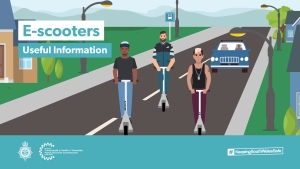 Why don’t you work with retailers so that customers know the law before buying?
We are working with retailers to explain the law. But, of course, the buying and selling of e-scooters is allowed.

E-scooters are much greener and more efficient than some other modes of transport!
This is about the safety of e-scooter users, and other road users – including pedestrians.

Why are e-scooters seen as dangerous?
E-scooters don’t have things such as number plates, signalling ability, and not always visible rear lights. Riders also don’t often have appropriate safety equipment. Other road users may be put at risk.

Isn’t it an issue with motorists, not e-scooter users?
All road users have a responsibility to do so carefully and with respect for others, and our teams do take action against those responsible for illegal driving every day.

Are e-scooters seen as more dangerous than pedal cycles?
E-scooters and pedal cycles are classified differently under the law. As Mechanically Propelled Vehicles (MPVs) or Personal Low Emission Vehicles (PLEVs), the law says e-scooters can’t be used on the road or any other public place.

OK, so what about electric bikes?
Electrically assisted pedal cycles are allowed in public places if they have pedals able to propel it, the electric motor’s power doesn’t exceed a specified limit, electrical assistance cuts out when the vehicle reaches 15.5mph, and the rider is not under 14 years old. All other electric bikes are treated the same way as e-scooters. More information.

What happens if police stop me when I’m riding an e-scooter on a public road or land?
The scooter may be seized, and you could be liable to be prosecuted.

I’m a parent – if my child is stopped while riding an e-scooter, would I be prosecuted?
You could be liable to prosecution for allowing a child to ride otherwise than in accordance with a licence, or with no insurance.

I think the law should be changed.
Don’t forget that politicians – rather than the police – make the law.

I’ve seen e-scooters being ridden legally elsewhere – how come?
Some areas in England undergoing a trial where their use is allowed (but regulated) on public land and roads. No such trials are taking place in Wales.

Are e-scooter users breaking any other laws?
There are numerous potential offences that could potentially be prosecuted, including using a vehicle with no insurance; riding carelessly or dangerously; contravening traffic signals; or for drink/drug-riding.

Am I OK to ride my e-scooter if I have a driving licence?
Technically you need a category Q entitlement to ride an e-scooter, which anyone with a full or provisional licence will have. However, the law still states you cannot ride them on public roads or land. In addition, anyone without a licence can be prosecuted for that offence as well.

Why can’t police concentrate on more important crimes?
We have a duty to enforce the law. We also react to community concerns, which do include the nuisance and danger being caused by some e-scooter users. Officers can take specific action where scooters are being used in a way causing a public annoyance.

Isn’t this just an easy way for police to raise some revenue?
Police don’t benefit from seizing e-scooters or taking other action against their users. However, it helps keep our roads, pavements and communities safe.