Forty Vehicles Stopped in Operation to Crackdown on Motoring Offences 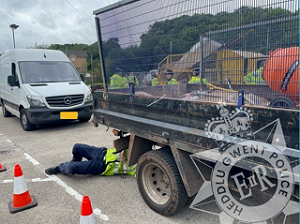 Gwent Police Officers checked 40 vehicles and made four arrests as part of the latest operation to crackdown on motoring offences.

Officers teamed up with partners from the DVSA, GoSafe, The National Vehicle Crime Intelligence Service and The Equipment Register (TER).

Throughout the course of the day, the operation saw:

PC Sally Davies said: “We’re committed to increasing the safety of all road users in Gwent and Operation Utah is one of the ways in we are taking action to tackle motoring offences. I hope the results from this operation send a clear message that driving irresponsibly or not maintaining the condition of your vehicle is unacceptable and you will be dealt with robustly.

“I would like to thank our partners for working with us on this operation to make the roads in our communities as safe as possible.

“We all have a role to play in ensuring the safety of other road users – I would urge all motorists to drive carefully, responsibly and within the limits of the law and to ensure their vehicles are well-maintained at all times.”