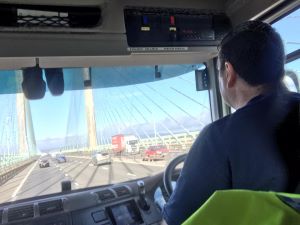 Gwent Police Officers returned to the cab of an unmarked HGV last week as part of an operation to crack down on motoring offences on the M4.

Drivers who were spotted committing an offence, such as using a mobile phone or not wearing a seatbelt, were later stopped by officers.

The operation took place between junctions 22 and 30 of the M4, between Monday 14 and Thursday 17 March.

More than 40 motoring offences were detected on the motorway during the four-day operation:

PC Matt Rue said, “Motorists must think about the consequences of their actions – a moment’s distraction can change innocent lives. It is never a risk worth taking.

“The HGV is a useful tool as it gives our officers the opportunity to identify motorists who might be committing an offence from an elevated position.

“We’re committed to increasing the safety of all road users in Gwent and operations such as this are one of the ways in which we are taking action to tackle these types of motoring offences.

“I hope the results from this operation send a clear message that driving irresponsibly is unacceptable and you will be dealt with robustly.”